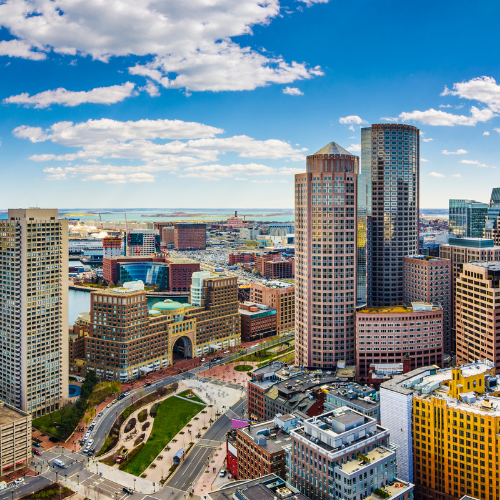 It’s no secret that virtually every organization is hiring right now. With “Now Hiring” signs plastered almost everywhere you go, it comes as no surprise that there’s a high demand for court reporters. Whether you’re contemplating going to school for this prestigious career, you’ve just completed the courses, or you’re just looking to relocate and need to know the job prospects, we’ve put together a list of the top 10 states with the highest demand for court reporters.

New York has the Biggest Demand for Court Reporters

With a population north of 8.4 million, New York offers a vast variety of career opportunities and it’s no wonder that it holds the number one slot for court reporter positions. The average annual salary is right at $100,000 with the lowest percentile pulling in around $60,000 and the highest taking home a little over $170,000.

Court reporting in Massachusetts is comparable to New York. You can earn an average annual salary of around $100,000 with the highest being right at that same $170,000 mark. However, rent for a 2-bedroom home is reported to be about $1,800 in most major cities, which makes the cost of living in Massachusetts considerably higher than the national average.

Of course the huge state of California has a lot of court reporter positions available and those with experience can expect an average of $90,000 and if you’re just starting out, you’re looking to pull in around $50,000.

The demand for court reporters in Iowa is high enough to definitely keep in mind. There are just under 40 different court reporting jobs available and the best of the best bring in $137,000. Coupled with the fact that the median home cost is just $161,000 and the overall cost of living is lower than the rest of the country, being a court reporter in Iowa could make for a really nice career.

The Lone Star state is another locale that you may want to consider for your court reporting career. There’s no state income tax and the average pay clocks in at north of $75,000 with the higher percentile bringing in $141,000 but this can vary greatly depending on which city you decide to call home.

While it may not have as many opportunities as California, New York, or Texas, Illinois offers court reporters a salary of almost $90,000 and up to around $150,000. However, the median home cost is about $40,000 more than Texas.

The beautiful state of Virginia has a really nice demand for court reporters. On the high end, you can earn $136,000 and just under $50,000 on the lower end of the scale. The cost of living is on par with the rest of the country but the median home cost is $329,200. Which is about $40,000 higher than average.

Next up, Minnesota could be a great place to head for a court reporter job. You can expect an average salary of $70,000 and with a cost of living lower than the national average, it could be the perfect place to plant new roots.

With an average annual temperature of just 40° F in the north part of the state and around 48° F in the south, if you’re sick of humidity and long stretches of unbearable heat, Wisconsin could be your ticket to comfort. The demand for court reporters means that you’ll see an average of $65,000 a year and it can go up to over $110,000.

Last but not least, Washington offers close to $70,000 per year on average but the highest percentile brings in a little over $120,000. However, the cost of living is considerably higher than the national average and you can expect to pay around $450,000 for a new home.

As you can see, there is a good bit of demand for court reporters across the country. Whether you already live in one of the above states or you’re looking at relocating, court reporting is one career that the job market is favorable toward in quite a few states.

Are you in need of court reporting services? Contact our team here to learn more about our offerings!